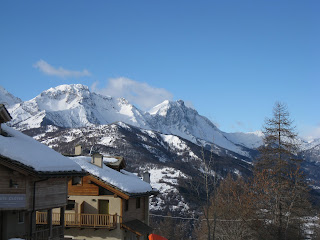 like the man sent out by his wife on Christmas Eve in search of tomatoes.

We had a climber friend who conquered many mountains, and raised a glass to each when he descended. He came to prefer drinking their health to climbing

yet he continued to climb and became an alcoholic, living only for drink and mountains.

It wasn’t the peaks that he cared for, but what lay beneath. The peak was just the icing on the cake of the mountain,

the green stem-end on the top of a tomato that you twist out and throw away.

Encountering the empty stalls of city supermarkets, he drives into the countryside, to a village where an old-time grocer is trading late,

and there his eyes come to rest on a chipboard container full of tomatoes from the Canary Islands.

And this happens because it has been decreed that there can be no Christmas without tomatoes,

just as there can be no Christmas without snowy peaks to climb and celebrate in drink.

perfect in their own right and in their deviations from symmetry, offering alternative versions of beauty, a plurality of possibilities?

Here's to tomatoes and mountain peaks. To climbing and driving in the snow.