A TOUCH OF SPRING IN JANUARY 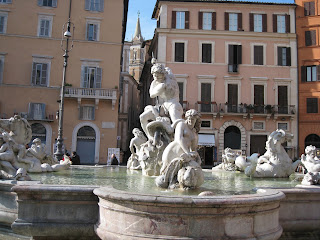 I was sent on a fool’s errand by the receptionist yesterday (I should have phoned the place beforehand): she browsed the net for ticket outlets for Saturday’s Mahler Concert in the Parco della Musica and said there was an outlet in Largo di Torre Argentina, in a large bookshop called Feltrinelli. Off I went de shúil mo chosa past the Colosseum, down to Piazza Venezia, past the Vittoriano monument (nicknamed the typewriter or the wedding cake). I turned dutifully left into Via del Plebiscito and before I knew it I was in Argentina, which was ‘frantic with traffic’ (as The Rough Guide knew).  After a few swivels of the head I saw Feltrinelli’s, crossed the road carefully and went in. I was directed to the ticket office by an uniformed person and was told that tickets for that particular concert were not for sale there, I’d have to get them from the concert hall in Parco della Musica.

Rule One: Never assume that you can get tickets for a particular concert at a general ticket outlet.

Nevertheless, I enjoyed the walk among the imposing monuments, palaces and churches in spring-like sunshine. There was definitely a touch of spring yesterday, with a few showers, the kind of harbinger of better times you also get in Ireland towards the end of January, a transient kind of quickening, an unusual mildness and luminosity. All the same, I took a bus back to the Colosseum, the 87. I have been warned that the buses are just as pickpocket-infested as the Metro. But on this particular trip I was surrounded by solid decent citizens, and one woman helped me to validate my ticket, as I was pushing it into the machine wrong side up. I have validated tickets on Italian buses hundreds of times, but it was an unaccustomed type of machine.

This afternoon, coming back from a solitary pint in Finnegans, an Irish pub off the Via Cavour, after jotting down some lines of a potential poem, I passed the pavement-sleeper with raised knee I had seen earlier by the railings of the public park across the main road from the Colosseum. He was now totally covered by a pink blanket or cloth which had assumed the shape of an egg, as if he had disappeared back into the womb. A few meters further on, a few fresh hawkbit flowers nodded on their green stems inside the railings of a park. These sights, coming one after the other, gave me the strangest inarticulate feeling: a mixture of sadness, joy and an intuition of fate.