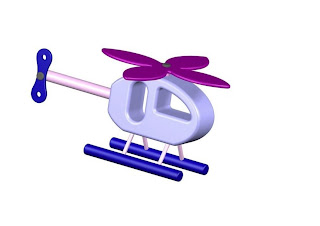 Toy helicopters? During the Celtic Tiger period in Ireland, the thing to have was a helicopter. It was a toy for those who had made an awful lot of money during those boom years. And of course, if one had a helicopter, one had to have a helicopter pad.
It was nice to be able to say, 'Go round the back, past the helicopter pad, and you'll find us in the conservatory.'
There was a story about a man who used the roof of a building as a helicopter pad, without permission, and damaged the building's structure.
"Keeping up with the Jones's" reached new levels of insanity in the Celtic Tiger era. I try to capture this surreal situation in my poem The Copper Mines of Peru, to show the effect it had on the relationship between a fictitious teenage son and his father, and on the whole family.

THE COPPER MINES OF PERU

A sullen-faced youngster
is getting into his father’s car.
He’s had a bad childhood.
I had a bad childhood too
but I got over it. Look at me,
I’m going through the cycles
of eternal recurrence.
Unlike my father did on me,
I never laid a hand on him
and yet what his eyes are saying
every time I look at him
is that I have failed him,
that I embarrass him,
that my very existence
was the cause of his bad childhood
What he needs is a good funt
but you can’t get away with that
nowadays. I’m driving him to school
but he doesn’t want to be driven to school,
above all, he doesn’t want me
to drive him to school,
and if he must be driven to school,
it should be in a Merc or a Beamer.
But what he really really wants
is to have his own Merc or Beamer
and drive himself to school.
Would he be happy with that?
No, there’d be something else
biting him. Some day one of his pals
would descend to school in a helicopter.
Then he’d want a fucking helicopter.
And would that take the perpetual sulk
off his face? Would he get a life then?
You can be certain he wouldn’t,
because I’d buy him a shit helicopter
having mortgaged the house to pay for it
and sold my wife into slavery
and sent his younger brother and sister
to work in the copper mines of Peru.
While other fathers would buy his classmates
brand new classy twin-jet-engined helicopters,
his would only be second hand
with a single piston engine
and not one of the girls in the school
would ask him for a lift.
And if I tried to reason with him:
‘Son, you can take it from me...’
‘Oh Jesus, not that again,’ he’d say.
‘Let me talk, you little fucker,’ I’d say
and he’d throw his eyes to heaven,
heaving a petulant sigh.
‘You can take it from me,’ I’d say,
‘that if a girl likes you, really likes you
she won’t care if your helicopter
is shit. It’s you, not your helicopter,
she’ll want – your personality.’
‘Tell that to the Marines,’ he’d say.
‘Anyway, I don’t have a personality.
I had a bad childhood –   remember?’
And this is how it would finish:
we’d settle down in our sleeping bags
in the cabin of the shit helicopter
parked on a flat rock
on the top of a mountain.
‘I miss Mom and Billy and Frida,’ I’d say.
‘So do I,’ he’d say.
‘Fuck you and your teenage angst.’
‘Fuck you and your shit helicopter.’

SEE A VIDEO AT https://www.youtube.com/watch?v=0PsdkRgVPGI of a reading I gave of this poem at 'On the Nail' Readings in Limerick March 2016.

Posted by Ciaran O'Driscoll at 11:07 No comments:

REVIEW OF "A YEAR'S MIDNIGHT" IN CYPHERS 74 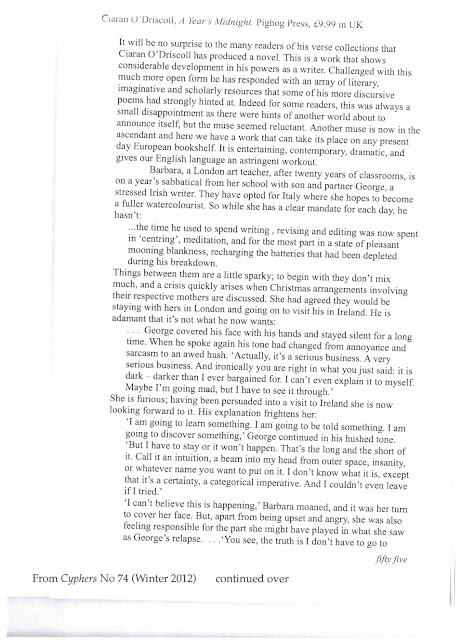 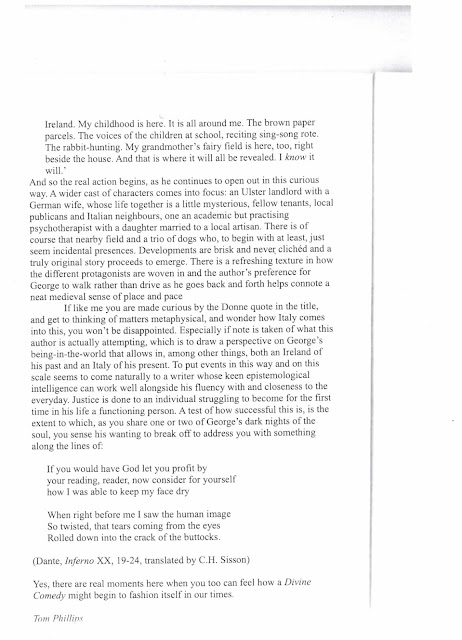 Posted by Ciaran O'Driscoll at 14:37 No comments:

My novel, A Year's Midnight, recently published by Pighog Press, is set mainly in Umbria, Italy. Here are some pictures from the walk which George, the main character, undertakes on Christmas morning at the beginning of Part II, in an attempt to dispel a tremendous hangover. The stretch of water in the background, which might pass for an inlet of the sea, is in fact Lake Transimene, not far from where Hannibal defeated the Roman Legions in 217 BC, during an earthquake. The grey dog by the side of the path is not one of the three dogs on which the canine characters in the novel are modelled: they were all poisoned later in the 'truffle wars' (cf Rogero's remark, p 52). It wasn't that the dogs were truffle-sniffers, it was just that they ate the meat left out by one lot of truffle hunters to poison rival hunters' dogs. 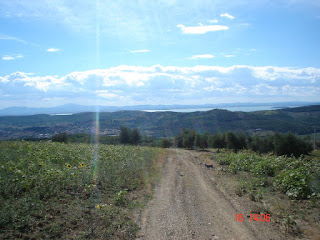 As one can gather from the sunflowers, these pictures were not taken on Christmas Day, but in the middle of August. And there's the grey dog again below, beside an olive tree. She was named 'Pinup' by Fernando, her owner. I could hear Fernando frequently calling Pinup during my stays on his farm: 'Peenup! Peenup!' I came up with a groan-inducing pun which linked the Italian pronunciation of Pinup with a popular type of Italian white wine: Peenup Grigio. (Grigio meaning grey.) 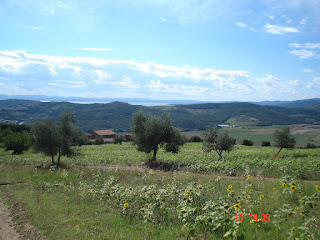 The third picture below shows one of the most striking features of the Umbrian landscape: the patterns made by the rows of olive trees. It also shows another, sadder feature: an abandoned house. There are many such houses in the countryside where I used to stay. This particular house features in my novel as the place where Barbara (George's partner) and her son took a rest on their walks together, and Barbara  'doodled dog faces on a sketchpad...while the dogs hovered and panted around them, impatient to carry on' (p 40). 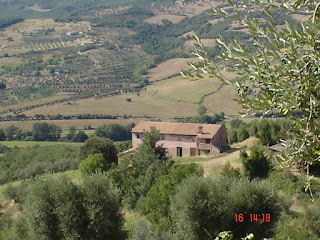 Posted by Ciaran O'Driscoll at 10:56 No comments:

REVIEW OF 'A YEAR'S MIDNIGHT' 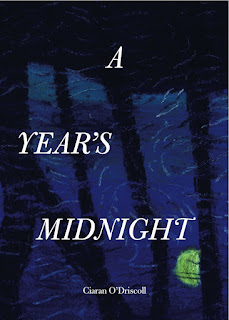 Delighted to see a new review of 'A Year's Midnight' on Amazon.co.uk this morning. Written by  'Blighty', it is succinct, allusive, witty and seasonal.

Dark amid the blaze of noon,
By
Blighty - See all my reviews
This review is from: A Year's Midnight (Paperback)
George, like his sainted namesake, is tormented by dragons in the rural Italian retreat that he and Barbara have chosen for a year of serenity, following his breakdown. Yet the burning Mediterranean sun cannot dispel the darkness within, until George goes down to the woods one day ... and discovers a big surprise. Ciaran O'Driscoll's tale of personal rebirth in Italy, mother to the wider Renaissance, displays the poet's ear for words and keen eye for detail. Barbara's symptoms, for example, "evaporated, like water off the shell of a boiled egg". The book is tautly written and just the right length for a Christmas read by the fireside.

Posted by Ciaran O'Driscoll at 12:37 No comments: