A 'FOUND POEM' ABOUT A CITY BUS TOUR

Our city is a tort, with the cherry

in the middle. And this is Schwartzenberg

on his horse after the battle of Leipzig,

and you can see he was victorious.

And here is a street that was built to bring

beer to the poorer kind, not to disturb

the elegant people in the centre circle.

There was no food in the old coffee houses –

they didn’t want to have the smell of onions.

And this is the Town Hall – in German called

the Rathaus, with the Christmas Tree in front,

which is not ready yet. A different window

is opened every day to bring the gifts.

And here is the Ministry of War, now called

the Ministry of Defence, but in those days

they called it what it was. The city has

it had no trains that travelled to the East.

And there you see the Church of St Charles,

Here is the Natural History Museum,

it is ranked among the first ten of the world.

This is the New River. The Old River

is now a lake. The artists used to live

over there, but they had much scandal,

and so they were not given galleries.

And this is Metternich, who told Franz Joseph

‘You don’t discuss with the people, you thump them.’

Later, we go to Concert Hall for Strauss.

Watching the shops is also interesting

but in the fog you can’t do anything. 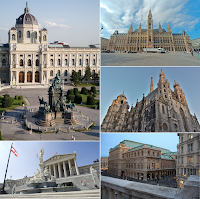