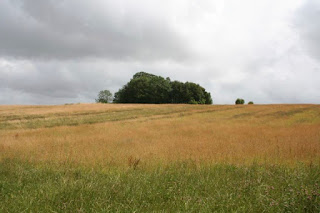 THE SEARCHER OF COCOONS 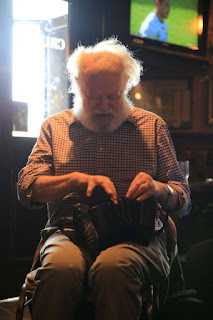 Searching for spider's cocoons in the folds of my concertina bellows, with Wasps vs Northhampton Rugby Game in the background on TV (silent), Sunday 09 April 2017, Cruises Sunday Afternoon Session, Ennis.

PHOTO BY BOB SINGER
Posted by Ciaran O'Driscoll at 16:23 1 comment:

THE POKER OF COMMERCE, THE BACKSIDES OF POETS

THE POKER OF COMMERCE, THE BACKSIDES OF POETS.
(A Dialogue between two poets)

Poet 1: That poker there, for heaven’s sake! Why won’t you let me take it out of your backside?

Poet 2: No thank you, you scruffy Kavanagh-type layabout with the smell from you. I’m perfectly happy with the poker up my backside thank you very much. It may impede my poetic movements a bit but at least I’m getting money from the Arts Council and the Anglo-Irish Poker Foundry Foundation. Not like you, you heap of pong. I can smell the smell of you in your poetry and it stinks. The Arts Council, too, can smell your poetry a mile away and as for the Anglo-Irish Poker Foundry Foundation, it wouldn’t put a poker up your backside even if you begged it too.

Poet 1: Insulting me won’t make your poetry any less stiff than it is. In fact your poetry is as stiff as a poker. You’re only fooling yourself if you think it’s flexible and fluent. It’s not going anywhere meaningful, how could it when it’s as stiff as a poker and it’s up your backside. Like yourself – sure aren’t you up your own backside as well? The wonder is there’s room for the whole three of ye – yourself, your reams and reams of soi-disant poetry and the poker itself – all up your backside.

Poet 2: SOI-DISANT? How dare you, you piece of excrement, with the tattered coat and the unbearable pong of reality reeking out of you. I swear by my Gold Advantage Credit Card that you’ll see the end of your days sleeping on the streets with not a penny from the Arts Council or even from St Vincent de Paul because no one can stand the sight of you, even the charitable organizations will turn their backs on you in the end. Oh I can see it happening and it won’t be too long waiting, you’ll be freezing to death lying in a doorway, muttering SOI-DISANT over and over till the Grim Reaper takes you, you pig’s crubeen gnawed to the bone.

Poet 1: Well at least I have written a few memorable lines that future generations can hold onto in their dark hours. Unlike you, and your other Gold Advantage Credit Card poets with the pokers of materialism fixed firmly you-know-where, causing the True Voice of Feeling to degenerate in your voice-box to some kind of cold duck-quacking parody of all that is human....

Poet 2: I don’t have to listen to you. Goodbye, loser. (Exit, bearing grudge.)

Dear Poet 1,
Thank you for your application. I am delighted to inform you that the Arts Council, in association with the Anglo-Irish Poker Foundry Foundation, Gold Advantage Credit Cards Ltd and the Society of St Vincent de Paul, have decided to award you a Bursary in Literature. Your Bursary of €20,000 will cover a six month period, as specified by you, enabling you to complete a collection of poetry. There will also be a publisher’s grant made available to the St Vincent de Paul Press towards the publication of your completed work.
Your Gold Advantage Credit Card and your poker will be posted to you and you should receive them in a few days.
On receipt, you should phone the Anglo-Irish Poker Foundry Foundation to arrange a fitting.
Yours Sincerely,
AN Other
pp Arts Council

(Poet 1 sits at his desk in some distress, passes a hand over his furrowed brow.)

Poet 1: So it’s come to this! What the fuck will I do now?..... I suppose it’s best to accept.
After all, it won’t stop ME from lambasting the Establishment. No siree!!
(Emits a little whoop of joy.) 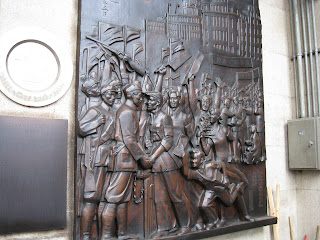 The Red Army Liberates Shanghai, a copperwork embossment/sculpture at the Pudong Development Bank, the Bund, Shanghai. The Red Army is joined by cleaver-wielding butchers (in the sense of meat-sellers) who had a large part to play in the winning of the city.
Posted by Ciaran O'Driscoll at 14:36 70 comments: