A MAN THE WORLD PASSED BY

He was sitting in the middle of the Spanish Steps
bent slightly forward, looking straight ahead.
Staring in the face of the Void, letting the world know.
In the ninth of the nine circles of Nothingness,
making a silent statement. In the rain.

Grey-haired, grey-bearded, perhaps in his early fifties.
The hood of his jacket not pulled over his head.
Rain splattering gently on the Spanish Steps
and on his hair. Two members of the Polizia Roma
a little higher up the stairway, watching him.

Like one of those performers who mimic statues
(except for his lack of make-up), suddenly
he comes to life: an arm reaches out,
two fingers raised in bored impatience
towards a young love-lingering couple nearby.

A DROP OF WELCOME RAIN

Sometimes rain comes like this
a gentle shower that’s hard to beat
for calling things to order
It calls my heart to order
I listen and am moved
No argument more powerful
it calms me to compliance
more willingly than downpours,
comes unannounced and soothing
The riddle of its falling
makes mystery easier
I see what should have been
a stand-out all along
It touches everything and so
I’m touched by everything
An all-embracing murmur
an omnipresence tapping
on my inmost being’s door
it throws a veil of comfort
over the garden and the trees
darkens the sandstone paths
postponing work and weeding
and without a word being said
calls amnesty and rest
Sometimes rain comes like this. 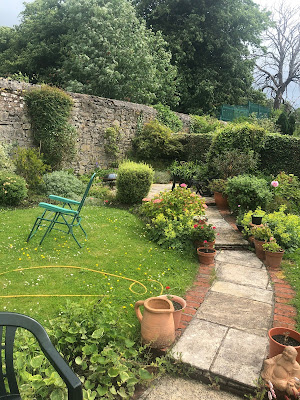 THE HOSPITAL AND COVID 19

Poems have been written about Covid 19 and poems have been written about the experience of a hospital stay, but has any poem been written yet about a hospital stay occasioned because of contracting Covid 19?
I have written poems about my stays in hospital and finally, last Saturday, wrote a sixteen-liner called 'What the Angels Say' which is really about my experience of Covid 19 so far, a case of undergoing a fairly uneventful isolation.
I have had two hospital stays in the past six years and I am considered 'high risk' for Covid 19, because of which I  continue to isolate to a good extent. But I am almost as afraid of going back to hospital as I am afraid of Covid 19.
My admissions to hospital over the past six years were to a public hospital not far from where I live, which has recently earned the title of the worst in the country for overcrowding. In 2014, I was admitted there on account of complications arising from a triple bypass performed less than a week before, in a hospital in Dublin. The second admission to the hospital in question was shortly after a hip replacement, when I was diagnosed with Sepsis and spent the month of August 2017 receiving intravenous antibiotics four times a day (morning, noon, evening, night).
I wrote a sonnet (as part of a longer sequence) about those two hospital experiences. It was sub-titled "with apologies to Patrick Kavanagh" because it references the latter's beautiful sonnet about recovering in hospital from lung cancer. It differs from the usual sonnet in that it was written (like Kavanagh's) in hexameters instead of pentameters. Also, my rhyming scheme is somewhat less regular than Kavanagh's.
Kavanagh was more thankful than I was for his experience, even while he was in hospital; for the new lease of life he was given, leading to an artistic awakening. Today, I have become grateful for my new lease of life, but the thought of having to return to that hospital again fills me with dread.

(with apologies to Patrick Kavanagh)

A year ago I failed to love a dysfunctional
ward in a public hospital: nurses overwrought,
each task cut short by one more urgent, low morale,
not counting how the chap in the next bed roared all night
in vain for his wife and son, and every now and then
the overwhelming odour of incontinence.
The main gate tempting me to a quick cigarette
when I had to be content in the smoke-free suntrap
beside the entrance door, the Sister’s allegations
that I falsely occupied an acute bed, the crammed
and ever-changing maladies! This is not claptrap –
there’s far too much of it about, disguised as sense
in the mouths of government ministers who have named
my sorry hospital a ‘Centre of Excellence’. 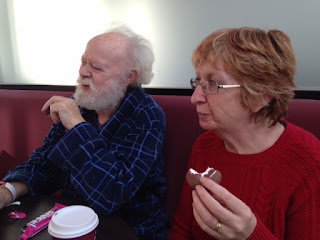 In hospital (note tag on right arm) on the way to recovery, with my wife Margaret and unseen visitors, during Cuisle International Poetry Festival 2014


I think that in Kavanagh's time, hospitals were scrubbed to within an inch of their lives, there wasn't the same danger of contracting a new disease during your stay. They had a more antiseptic feel to them.
The conditions in my hospital were, as you may have gathered from my sonnet, not very satisfactory. The thought of having to go back there concentrates my mind, and makes me determined to wash my hands several times a day, avoid rubbing my nose, mouth and eyes. I touch coins only with a paper napkin in my hand, and perform a number of other practices, which may be uselful against Covid 19 or not.
It's amazing how itchy my eyes and nose have become since we were told to avoid contact with the face. Perhaps these organs were just as itchy before, but in those days touching them wasn't a matter of life or death!

WHAT THE ANGELS SAY

WHAT THE ANGELS SAY

Will you look at him, they say,
with everything under padlocks,
and him drinking Burgundy
and playing his squeezebox.

And the state of the world
and the shortage of sanity
and the dearth of angel dust!
And will ya look at him they say

heading off to Italy
in the middle of the Covid,
reciting into his mask,
thinking he's good as Ovid. 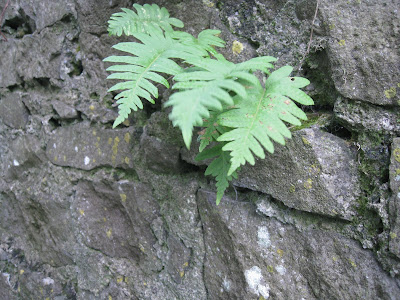 Posted by Ciaran O'Driscoll at 15:35 No comments: