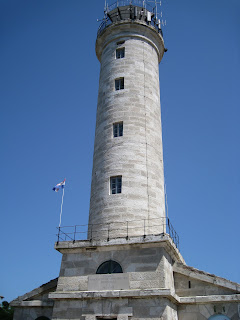 The lighthouse is in Savudrija, on the North Western tip of Croatia, right beside the Slovenian border. It is the oldest lighthouse on the Adriatic, built in 1818. Many lighthouses on the Croatian Coast now serve as tourist accommodation. 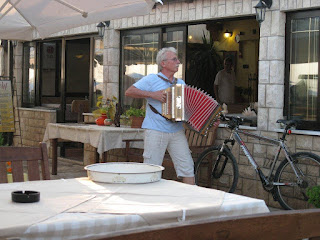 We found the accordion player at a seaside restaurant in Umag. He is playing a Slovenian accordion. He told us it was rather rigid, specifically designed for waltzes, and that it would probably be hard to play Irish reels on it.

Posted by Ciaran O'Driscoll at 21:47 No comments:

THE CHOO-CHOOS IN NOVIGRAD 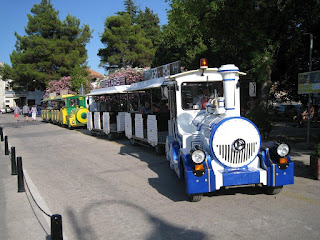 Novigrad, a seaside town in Istria, Croatia, has very few taxis. I counted one on my last visit there but it was missing most nights, and the taximan was not answering his mobile.
However, Novigrad boasts an excellent service from its charming choo-choo trains (not that they puff steam, even if they are Disney-like versions of the old steam engines that made the choo-choo sound of my childhood). And while they look like they were designed to carry children around a funfair, they provide transport for people of all ages, travelling in all directions, for a modest fare, rattling their way over the streets and roads in the direction of out-of-town hotels. And while there are designated official stops along the way, you can always bargain with the driver to let you off at a place not officially designated, provided it's along the route. Late at night, the last choo-choo trains are full of jovial chatting holidaymakers, Croatians and foreigners, in the sultry summer nights. I shout at the driver to remind him that we are approaching our unscheduled stop. We get off and walk the rest of the way to our apartment.
Posted by Ciaran O'Driscoll at 00:15 No comments:

HEAD ON THE WATER

There’s a head on the water. I see it
every morning and evening as I stand
on the beach’s frothy edge – the walrus-head
of a healthy human specimen between
me and the motor-driven schooners moored
in mid-harbour, their sails superfluous
and furled; between the open sea
and the cactus-clustered mountains.

Between me on the hissing hem of froth
and the schooners’ supernumerary sails,
between the cliffs and the promenade I see
a regular middle-aged hominid head,
a brine-encompassed brainbox that proceeds
stealthily from my waking to my sleep,
its wet mouth lapped by whiskers, half-closed eyes
rapt in some indecipherable bliss.

A head that has made this incongruous
element its own, a head on its own
that has made the sea its own, a head
that I cannot get out of my own head,
moving without making sense between
the harbour mouth and the holiday apartments,
de facto as the cactus plants that rest
snug in their places on the mountain slopes.

I watch it daily from the ocean’s edge
shifting without a ripple or a wake
in the lagoon between a reef of yachts
and my reluctant water-testing toes,
I see it floating through recurrent dreams –
a king in a country of his own making,
capo di capi not to be discounted
in the fortunate isles of imagination.

A cranium building a head of steam
in its unwimpling progress up and down
the smoothness of the surface, unconcerned
by what is happening offshore or on.
This head of heads, no other head’s contentment,
content without companion head, ensconced
in isolated mindfulness. A head
to end all heads, the mother of all heads.

Posted by Ciaran O'Driscoll at 00:32 No comments: