My mother used say to me, 'Oh Ciaran, you have a terrible temper'. At other times she would say, 'And did you bottle it all up?' referring to my childhood anger against my childhood bullies, a topic I have dealt with in my memoir A Runner Among Falling Leaves. 'Passive aggressive' is how some other people have labelled me.

Perhaps because I have (potentially) 'a terrible temper', but 'have bottled it all up', I am seen as 'passive aggressive'. I don't know: my wife's mother used to say 'Ciaran is a very quiet man'. I remember when I was seven hearing my aunt discussing a photo of me with a friend of hers and saying 'he looks sad', and the friend using the words 'highly strung', which I didn't understand.

Watching a match on television I generally tend to favour the underdog, unless the Munster Rugby team or the Kilkenny Hurling team are playing. Favouring the underdog in a thriller of a match between two 'neutral' teams would possibly involve me changing sides, for example  in order to support the losing side, or the side which I perceive the ref is not treating fairly, or to go against the one I perceive to be more arrogant or fouling more.

I still take Christianity seriously, and tend to favour the meek over the ambitious. I can get quite apoplectic about people who display an unearned sense of entitlement, or whose sense of entitlement is aggressively pursued without regard for the effect it has on others.

During lockdown, we have watched a lot more TV than usual, and I find many Television ads distasteful because they are manic, maniacally competitive and encourage children to imitate them. That sanctimoniously fanatic ad for GAA games, the one which begins with the statement 'We are born. The sides are level' is a case in point. Other ads seem to be encouraging people to prepare for life in an approaching time when civilization has broken down. While there are many excellent, artistically talented and genuinely comic ads, I also feel that there are too many aggressive, disturbing and unfunny ones on today's goggle box.

All of this is a preamble for a new poem of mine, "Entitlement", which will feature in my forthcoming collection, Angel Hour, to be published later this year. This is a 'sneak preview' of 'Entitlement', because I feel that, as readers of my blog, you are entitled to it :–)

don’t stay in their places the way they used,

a cup falls to the floor, an office moves,

and I wonder has it anything to do

with the new feeling of entitlement?

I don’t mean to cavil with human rights,

the attitude I speak of is different:

one person’s entitlement, as sure as sin,

will diminish the entitlements of others.

And why are these self-told entitled ones

unable to calm down and take it easy

if there’s a normal human being left

at all, marvel how scarce a champion

of the ordinary has become, regret

there are so many can’t be satisfied

with a bite and sup, a roof, someone to love,

a seaside holiday, a book to read.

Death and taxes on it! Disappointment

is too tepid a word for what I feel

the jostling and the fighting till I want

to shout For God’s sake will you all relax?

You’re creating too much anxiety!

If you want freedom, lose the rivalry,

compete against competition itself.

a lone bush in the middle of a field

encompassed by the murmur of the rain.

And after that, who knows? Maybe you'll twig

what life's about. (It's not entitlement.)

Posted by Ciaran O'Driscoll at 14:29 No comments:

I think one of the things that helped me during this Pandemic is the fact that I once spent ten years in a religious order. Another is that my wife and I share a sense of humour that verges on the graveyard type. It has also helped that, although I left a religious order, I haven't left my belief in God and the afterlife: matters are all going to be sorted, but not necessarily down here.

Having enough money to live on is a great help, as is having a healthy appetite and an ability to cook something appetizing, and thereby to look forward to dinner time. What else is there? Watching rugby on TV, although the home channels have by now shamefully abandoned the Heineken Cup and the Pro-14 to commercial channels. All I can watch live are the Six Nations fixtures. Hence during this Pandemic I have watched old recordings of outstanding games over and over, and depend on highlights for Heineken Cup and Pro-14.

The news at five-thirty is a must, bringing the latest Pandemic facts and figures. Together, on week evenings, we have been watching crime dramas. On weekends we play music together and drink a few glasses of wine. We have a couple of friends whom we Zoom and my siblings to phone. Our son, living in London, and his partner, have given us a grandson, whom we hope to see in the flesh post-lockdown.

I have made strides in learning new tunes on my concertina. I have miraculously survived visits to the local grocers and the off-licence, and am now fully vaccinated. The last holiday we had was a 'staycation' in Donegal in July 2020, which was pleasant. Having had more time to write means that half of the extra time was spent avoiding writing, but I hope to publish a new collection of poems this year.

Many many people have written Pandemic poems. I, too, have written one. Even though I cannot begin to comprehend the horror that other people have suffered from Covid 19, I think there's at least a surreal line or two in this poem which point toward it.

There’s a rip in my green trousers

just above the knee,

a rent in the scheme of things

on the edge of my patella.

I don’t know how it got there

and can’t be arsed to mend it

or go searching for a seamstress

because when I am asked

to recite or be a mentor,

and within my five kilometers

other walkers keep their distance,

too far to spot the tear,

because it’s the Pandemic.

And the TV took it on

to report the daily numbers

of the stricken and the slain

and told us wash out hands

but many didn't wash

because it seemed too simple

a cure-all for such pestilence.

and there were those unfortunates

who once only, before

they brushed an eyelid's itch,

forgot to swab their fingers

although it's the Pandemic.

And even when I go

for groceries to the Aldi

not a soul remarks the snag

on the edge of my patella

and it’s not because they’re blind

to rips or rents in garments,

it’s because they’ve got the jitters

and the one and only detail

they look at is my mask

which is now a part of me,

So I’m not at all put out

by the rip in my green trousers,

I’m glad of any trousers

because it’s the Pandemic. 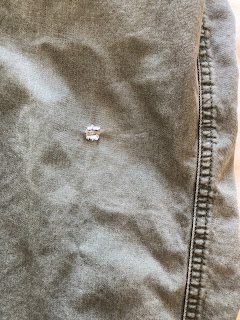 Posted by Ciaran O'Driscoll at 15:29 No comments: