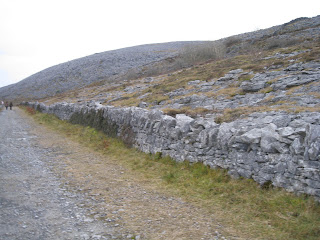 I seem to have a predilection for photographs of barren landscapes with figures in the distance. They are evocative. Where are the two figures going? Is this the beginning of a story or could it be the end? In Yevtushenko's poem, the old schoolmaster fades into the snow at the end, as the children watch him from the classroom window: 'a little longer and he will be so white/ we shall not see him in the whitened trees'.
Evocative of ends and beginnings: of leaving a scene or entering a new scene.
Perhaps one of the figures is luring the other into the barren landscape for a fell purpose.... Perhaps they are going to examine a curious set of markings on a rock....
Or maybe this scene is from the middle of a novel, and the two figures are taking a walk together to try and resolve a crisis....
In any case, the scene is in the Burren, near New Quay, on New Year's Day 2011.
Posted by Ciaran O'Driscoll at 22:00 No comments: 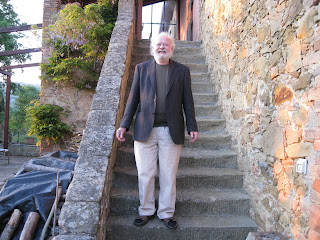 He pauses on the balcony steps for a photograph. He looks a bit fragile: he was admitted to hospital with suspected appendicitis only a week before. That was in Limerick; now he is in rural Italy, in Umbria, on a farm which has been converted into apartments. The stone staircase leads up to the one he has rented for a few days with his wife. Two friends from London are renting another apartment at the bottom of the stairs.
The wall to the right of him has a couple of bird's nests in its crevices. To the left, a winter supply of logs for the huge open fire in his apartment is covered by polythene, and the wisteria has been excessively trimmed by the landlord. Beyond the wooden framework for a summer canopy, and some trees, a bluish haze of countryside suggests itself. 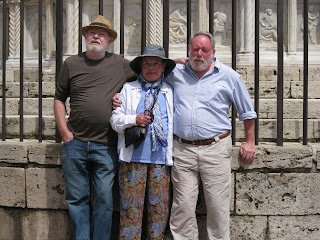 It's a few days later and he's in Perugia with his two London friends, on the Corso Vannucci, beside the famous fountain of Works and Days, refurbished over a decade and railed in now to prevent vandalism. Not one of the three of them is getting any younger, but he looks better in this photo, less etherial, more sensuous, with a trace of healthy insouciance. 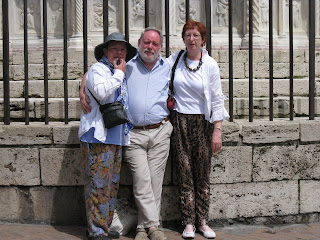 The same setting, this time with herself, his wife, on the right; the photographer photographed.

ADDENDUM. Fascinating Italian phrase: In bocca al lupo. Meaning literally "into the mouth of the wolf", this expression is used to wish well to people undergoing competitive ordeals like exams, driving tests, interviews for jobs and so on. It seems on the face of it similar to the English expression 'break a leg' said to actors before a performance, i.e. it is simply a contrary way of wishing good luck by stating the opposite. However, it occurred to me on waking this morning (still under the influence of my few days in Italy) that the saying could go back all the way to Romulus and Remus, the twins who were abandoned at birth and carried off in the mouth of a she-wolf to be suckled and reared, and who went on to found the city of Rome.
Posted by Ciaran O'Driscoll at 13:26 No comments: