ABOVE IS A SOUNDBITE OF MY SOUTHWORD POETRY PODCAST, IN WHICH I DISCUSS MY POETRY AND READ SIX POEMS FROM MY MOST RECENT COLLECTION, ANGEL HOUR, PUBLISHED BY SURVISION BOOKS 2021.
CONTRARY TO THE PERCEPTION IN SOME QUARTERS THAT I AM SOME KIND OF RECLUSE, I AM AVAILABLE FOR READINGS, DISCUSSIONS OF POETRY, INTERVIEWS ETC, BOTH IN IRELAND AND GLOBALLY. I HOPE THAT BY LISTENING TO MY SOUTHWORD POETRY PODCAST YOU WILL FIND ME BOTH FORTHCOMING AND OF INTEREST.
THE PODCAST IS AVAILABLE ON MOST SITES, APPLE, SPOTIFY, BUZZSPROUT ETC ETC.
GOOGLING ."SOUTHWORD POETRY PODCASTS" SHOULD GET YOU IN.
YOU MAY CONTACT ME BELOW AT "COMMENT" OR THROUGH MY MEMBERSHIP OF AOSDÁNA, VIA THE IRISH ARTS COUNCIL/ AN CHOMHAIRLE EALAÍON, TELEPHONE +353 1 618 0200, OR EMAIL AOSDANA@ARTSCOUNCIL.IE
Posted by Ciaran O'Driscoll at 10:13 No comments:

Below is the cover of my poetry collection The Old Women of Magione (1997) designed by the late David Lilburn. I am currently writing an essay for an Arts Council Blog (related to their 70th Birthday Celebrations) on my various collaborations with this brilliant artist, untimely gone from us. 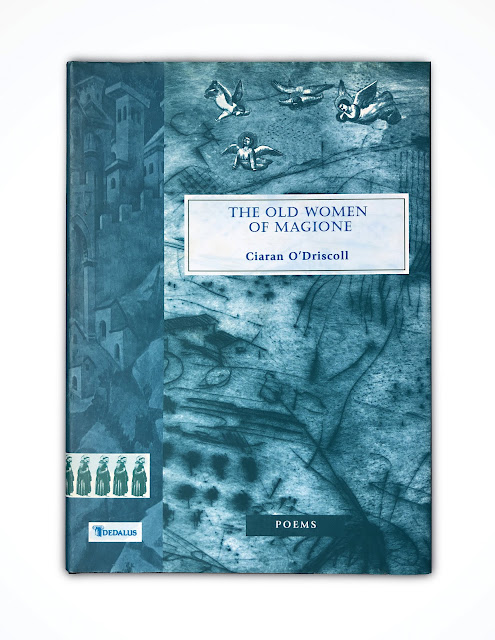 Posted by Ciaran O'Driscoll at 09:33 No comments:

A POEM FOR MY GRANDSON, OSCAR, NOW 16 MONTHS OLD

I sit on the sofa beside

His warm hand in mine

I think of Kavanagh’s poem

‘Every old man I see’

And know I’m one of them

I show my face on the mobile

To the offspring of my son

And then show him his own.

He slips my hand and is gone

Taking me through the rigours

of a mad merry-go-round

He’s a yacht out on the bay

I’m a hulk that’s run aground

But the foc’s’le of the spirit

on the wreckage of my hope

towards which my fingers grope

Till the channel disconnects

I’ll sing him songs of culture

and its enlightened texts.

"The duty of a writer is to remind us that we will die.

And that we aren't dead yet." Solmaz Sharif

I fell with my chair outside A Brasileira,

slumped to flagstones as it tipped a ledge

beside the coffee shop frequented by

Fernando Pessoa. A woman near me

was sipping a clear drink I thought was schnapps

until she told me later it was port.

As for Pessoa, he sat there impassive

under his trilby, taking nothing in.

But others reached out to lever me from

descended towards me in slow motion, faces

full of solicitude looked down on me.

Out of nowhere, a doctor declared himself,

inspected the wrist which bore my tumble’s brunt,

said I was fine and recommended ice.

I felt well enough to finish my brioche

despite some pain and discombobulation,

but I thought it churlish of Pessoa

to sit there dandily indifferent,

a simulacrum, while a fellow poet

plummeted on a ledge-forsaking chair

to possible perdition from the platform

I visited in portly pilgrimage.

It was mid-morning. Not having touched a drop,

even of clear port, I was clear-headed

to my hasty umbrage at his disregard:

Beaten in bronze and far beyond the year

of grace I was given to ghost through Lisbon,

I, too, would have liked to lend you a hand.

My dilemma was, and remains, that I am dead.

Posted by Ciaran O'Driscoll at 17:10 No comments:

She begins with Tipperary native Eleanor Hooker's Of Ochre and Ash, quoting from "When you dream of the dead":

Dad's by the hearth, encouraging ash back to life.

I've never lived in a house that held its heat I tell him,

unable to say I miss you in case he recollects

his death. Somewhere in the house

a child is crying. Find her, he says.

There's an awful lot in those six lines. The enigmas of ordinary Irish rural speech, its mind-challenging indirectness; what's not said; a flavour of Isabel Allende's novel The House of the Spirits; pathos; a simplicity which is not the same thing as directness (Martina Evans speaks of Hooker's 'deceptively plain writing.')

There's one guy and three gals. The guy is Raymond Antrobus and his collection is called All the Names Given.

My mother said my father had a heartless sense of humour.

That winter she fell, ice on the road...

He watched from the kerb – boozy red-eyed Dad –

laughed when she said he had a heartless sense of humour,

I think that's how he handled pain.

This is not as full as Hooker's lines, but I like the repetition of the heartless sense of humour, and the swift character sketch of Dad, with the pinprick epiphany of the last line.

In The Sun Is Open, Gail McConnell grieves for the loss of her father, shot in front of his wife and children, a sectarian execution of 1984:

night and day he made and trees

and peas and wendy houses

Finally, Parwana Faraz in "Forty Names", the title poem of her book, "tells the story of 40 young women shot in a cave. We know their names but not why they died, grief is expressed in their naming and the cinematic vision of that mountain place, their dresses animated, a herd of colours".

Faraz speaks of her mother who, on being exiled, 'carried her box of sewing needles and her butterfly sewing machine made in the USSR'. She advised her daughter to be 'a woman with an idea and a wallet."

Posted by Ciaran O'Driscoll at 14:40 No comments:

The 'Horse Outside' presents a traditional, animal mode of transport in the midst of flashy mechanical modes of transport which have become status symbols in a pathologically status-conscious society. When the sexy young woman mentions the alternative modes of transport available to her from rival suitors, the Spar-bag-masked yokel dismisses them all in favour of his equine means of conveyance: 'F**k your Mitsubishi, I've a horse outside...' This admirer of female allure comes into a highly artificial and class-conscious society like a blast from the past, like a healthy force of nature, full of primordial, unselfconscious confidence. He doesn't give a damn about the claims to a woman's heart represented by ownership of flashy cars; he believes (as I think we all do deep down) that a horse is a far superior being to a mechanically propelled vehicle. This cocky wooer is making a claim for a true gradation of status: the superiority of a living being over a piece of metal. Not only that, but the image of a horse 'outside' is a powerful one. The horse which is outside the door of the church is also outside our society, outside the wedding feast, outside the pale. It conjures up in my mind the Ancient Mariner, the Knocking at the Gate in Macbeth, An Inspector Calls, The Green Knight, Death the Leveller, the Eumenides, the Reckoning. I don't think it is too over the top to say that the Rubberbandits' horse outside also conjures up death and judgement. In one of their sketches, a claim is made that the only things that ghosts are frightened of are horses. There is also the echo between 'horse' and 'hearse': 'I have a hearse outside'. The church is a scene of funerals as well as of weddings. First Love, Last Rites is the title of a book by Ian McEwan. Not only does our society shut out the horse, it also blanks out on death. In the old days, it was a horse that drew the hearse to the final resting place. This is still so in the case of travellers, who are like the horse in that they are also 'outside'. Class distinction, sex, death and disparity are, of course, the life-blood of comedy.
© Ciaran O’Driscoll, 2014, 2021.
Posted by Ciaran O'Driscoll at 21:27 No comments:

THE ANTHROPOLOGY OF THE RUBBER BANDITS: (1) THE HORSE OUTSIDE

Limerick is well-known for its horses. They can be seen all over the place harnessed to sulkies, with a single driver holding the reins and leaning almost horizontally across the skeletal, one-seated frame. Horses can be seen grazing in fields within and on the edges of the city boundaries, piebald and roan and patchy and thrown-down looking. The Rubberbandits, a comedy hip-hop duo from Limerick, have taken the horse to their hearts. Is this because the horse might be 'a metaphor for a community centre' as one of them asks in a prank call to a psychotherapist? But as the psychotherapist says, humans are very complicated and it's hard to know exactly why the caller constantly dreams of horses as a result of a dog 'having sex with his head'. If his head was made pregnant by a dog, the caller wants to know, why is he dreaming of a horse, shouldn't he be dreaming of a puppy? 'Horse Outside', a single released by the Rubberbandits in late 2010, had phenomenal success and led to the duo's being catapulted into fame. The phrase reverberated in the English language as spoken in Ireland. It was even alluded to in an article about an architect in the Arts Section of The Irish Times. On You Tube its fame went viral and global. I remember how much all three of us loved it in my home. It struck some truly resonant chord for us. As it did for hundreds of thousands of others. I want to suggest why this might be so in the following few paragraphs. A HORSE A HORSE MY KINGOM FOR A HORSE GIVE US THE LOAN OF A HORSE SHAM SOUND MAN To be continued. © Ciaran O'Driscoll 2015 and 2021
Posted by Ciaran O'Driscoll at 17:17 1 comment: