NOVEMBER AND THE SPLEENWORT PLANT 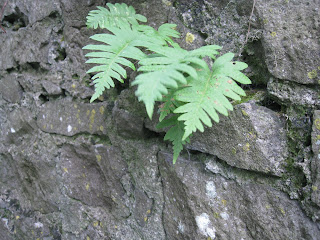 I have often observed the Spleenwort plant, pictured above, on my I boundary wall. It looked wretched and rustily withering all through summer and autumn. It's only in the last few weeks it has grown fresh fronds. This is a plant that seems to come into its own in the heart of winter.

Spleenwort is apparently so called because it was formerly thought to be useful in curing or easing disorders of the spleen. In November, many people tend to be more splenetic than usual, having had their good weather taken away from them, like candy from a kid, while the nostalgia of Christmas and its culinary comforts have not yet established themselves, despite the flooding of TV screens with Yuletide images.

This week's storm heralded the arrival of the dúluachair (winter weather). Were it not for the promise of Christmas feasts and holidays, Diana would have put anyone off his game (no pun intended).

But January tends to be more trying than November, in my experience, because of the fact that there's very little to look forward to, for a long stretch, once the celebrations are over and the Christmas tree consigned to the Corporation for mulching.

My poem, 'November Days', was published in Cyphers No 85, which came out in the late spring of this year, so I thought I might give it a more weather-appropriate airing here in my blog, after the first storm of the winter.

Hopefully, we will soon be distracted from the dúluachair by the lúcháir (joy) of Christmas.

when blessed with water. Christmas rules TV.
Although no visitor’s appeared in weeks,
the feeble latch-grip slips, the front gate creaks
its winter wolf-crying expectancy.

Our neighbour takes his DIY indoors,
no longer deafens us with power tools.
Spleenwort fronds survive on old stone walls,
each finger-lobe a blister-strip of spores.

LATEST EDITION OF CYPHERS, No 86

The literary magazine Cyphers inches towards its hundreth edition, and I wonder will I be alive to see it? Fourteen issues to go. At two issues a year, I might make it!
Cyphers has outlived all but one of its original editors. Pearse Hutchinson and Leland Bardwell are gone, and most recently gone is Macdara Woods, who died in June. Eiléan Ní Chuilleanáin is the remaining editor, and, as the acknowledgements say, she is assisted by Natasha Cuddington and Léan Ní Chuilleanáin, with Joseph Woods as consulting editor.
This issue begins with the voice of Macdara Woods. Non omnis moriar, indeed, and a voice that I suspect will be heard more receptively in times to come. In the poem 'Sheep and Rorschach Birds Dissolving', Woods evokes the stifling summer heat (of Umbria or our recent home heatwave?) with characteristic mordant gaiety, translating the cooing of pigeons into unflattering, scatological English:
You're useless say the pigeons
You're a broomstick
Fuck off you
Fuck off you
Senseless in the afternoon
The heat in the forties
And the light gone viscous
And nowhere dark enough
Or cool enough
Or deep enough
And never will be
In saecula saeculorum
For so much as a sliver
Of a memory of ice
To permit you to
Open the lungs and eyes:
It's brutal it's brutal
Sings a mindless bird
For a moment making
A commonality of sense
It's a Rorschach test
A Rorschach test –
Et sauve qui peut
Pipes up the
Water box in the back
Of the Lot –
And my eyes close....

Why has the poetry of Macdara Woods been met with such indifference in our little country? Even at their best, reviews have been less than glowing, carefully hedged with qualifications. It seems to bespeak a fear among Irish poets of upsetting some dictatorial presence by endorsing Woods' frequent Neruda-like forays into the risky realms of injustice, oppression and other deep-rooted evils of humanity: the arenas where poetry seeks to parley with that which is grave and constant in human suffering?

And you will ask: why doesn't his poetry
speak of dreams and leaves
and the great volcanoes of his native land?

In a recent review in The Irish Times,  John McAuliffe comments on a poem by Janet Robinson about Ireland's only frog species as follows: she 'describes “a frog/ whose skin’s a mucous membrane/ like my eyes and mouth/ where inside opens wetly to the outside”, an image so tender it hardly needs the accompanying description of bleach and detergent pollution to make its ecological point.'
The Ticket, 17/11/18, italics mine).


So what are we to infer from this?
(1) Tenderness itself will make an ecological point?

I am all for the 'soft' content of poetry, but surely poets ought to address the 'hard' content too?

I have also often wondered why Cyphers is not held in greater esteem, remembering the rather patronising remark of an otherwise supportive former Literary Editor of The Irish Times: 'Good old Cyphers'. I think the failure to give this magazine its proper reputation is because of its modesty: it does not tell you in advance that these poems are 'exciting', 'heart-stopping', 'delightful', 'fit to die in'; nor does it distinguish between the famous and the unfamous by opting for the big names before others. It simply places the poems before the reader to make of them what he or she may, to be judged on their merits, to take or to leave. But perhaps (and I hope) the dependably revitalizing contents of Cyphers will come into their own when people get heartily sick of boasting and oneupmanship, and eventually come back to their senses and make their own judgements; when an ethos might prevail where readers are allowed to be 'love-struck by a loveliness/ of lines, won over by a spell of stanzas' rather than being told vociferously what they ought and ought not to be reading.

There is originality and verve to the writing in the poems and stories on offer in this  issue. Here are the opening lines of a poem (in translation) which made me tingle with the pleasure of recognising how language can transform the world:
The mouths of post-boxes
Ruminating
On the sociology of absences.
The sparrow pecking
At disappointed onomatopoeias
Amongst the losing tickets
Of the charity Tombola...

And right beside it, a beautiful translation of Lorca's 'Romance de la Pena Negra' by the same poet-translator.
Cockerels break open the ground
pecking in search of the dawn
when down from the darkest mountain
comes Soledad Montoya.

Her flesh, yellow as copper,
smells of stables and shadows.
Her breasts, smoky as anvils,
are a sighing, ringing song....


What's not to like about this edition of Cyphers, which also includes two compelling short stories, 'The Gods of Mud' by Mark Czanik and 'Natural Birth' by Peter Arnds, and a commentary on 'Literary Publishing In Ireland' by the editor herself, amongst its many gems? 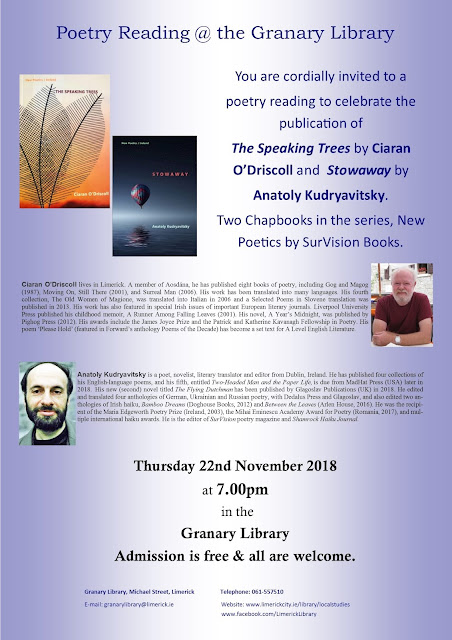 Here are a few thoughts on Surrealism, and the use of surreal images in painting and poetry, which I hope will whet your appetite for the occasion!

Baguettes instead of fair-weather clouds in the sky, a man in a bowler hat with a green apple hiding his face, a floating boulder, men in pinstriped suits falling like a shower of rain, a panoramic scene ensconced in the contours of a tree, as if one could see through the trunk: these are some of the images from the paintings of Magritte that I evoke in my poem in honour of the Belgian Surrealist painter. (The Speaking Trees, page 4).
These images challenge our ordinary perceptions and sense of reality, indeed they have a lot in common with the state of dreaming, but at the same time they invite us to look at surprising aspects of the visible world. You see Magritte’s baguettes floating in the sky and have to admit that they bear an uncanny resemblance to those long clouds associated with fine weather, (the kind that appear at the beginning of an episode of the Simpsons!)
Surrealism challenges our sense of reality by seemingly ridiculous associations: the chance meeting of a sewing machine and an umbrella on a dissecting table is the example which the founder of official Surrealism, André Breton, offered in his Surrealist Manifesto. Surrealism challenges our sense of reality by seemingly ridiculous associations, which are like the secret logic of dreams. It claims to access the unconscious mind where feelings and memories are often hidden away from ordinary life.
Poets as well as painters have often come up with images which are surreal. T.S. Eliot begins ‘The Love Song of J. Alfred Prufrock’ with an image which is strikingly so:
Let us go then, you and I,
when the evening is spread out against the sky
like a patient etherised upon a table.
This image is certainly surreal and also challenging to the whole concept of poetry that was prevalent at the time. You have the first two lines leading you to expect a typically lyrical poem, but your expectation is exploded by the third line. This was not the kind of thing expected of poetry! It has nothing to do with a beautiful sunset, the calm of evening, instead it evokes illness, something not right, something out of kilter. In this case it evokes Prufrock’s unease with his own life, and maybe as well it expresses Eliot’s sense of being out of synch with the kind of poetry that was prevalent at the time.

Posted by Ciaran O'Driscoll at 17:35 No comments: