IN PIEDMONT FOR CHRISTMAS 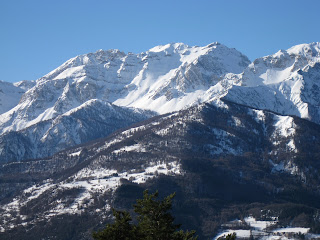 The Alps, a shot from Sauze d'Oulx, an Italian skiing resort. I protest that I did not go skiing whilst there. My son did. I went walking (sometimes) with my wife. We did not drink Barolo, a splendid red wine of Piedmont (the region), but we brought some home, and have been drinking it for the last two nights.

It was strange and different and wonderful to go to the Alps for Christmas, but in my view the Christmas dinner in our hotel, four-course as it was, did not match the Irish traditional plate filled with turkey, ham, roast potatoes. mashed potatoes, turkey gravy, turkey stuffing and various vegetables including brussels sprouts, followed by plum pudding set alight with brandy or whiskey and served with cream or custard.

Was it worth going to the Alps for Christmas? Yes it was, if only because we didn't have the stress of preparing the Christmas dinner. It was nice to be served everything for a change. And also we were certain of snow, which is on every Irish Christmas card but hardly ever occurs in Irish Christmas reality. The nostalgia of snow. And the mountains, being surrounded by those Alpine peaks, had the effect of putting things in perspective; sub specie aeternitatis, as Spinoza put it.

I will be posting more about our Christmas holiday in Piedmont: watch this space.

And a Happy New Year to all my page-viewers!