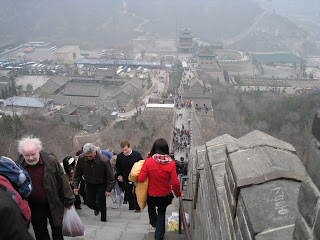 There I am, in March 2008, lumbering up the Great Wall, carrying a plastic bag which contains a water bottle and a pullover, on one of the excursions of a ten-day China Tours special.
The Great Wall cannot be seen from the moon. Its vague outline can be seen from about 100 kms into space, depending on weather conditions, but the same can be said of many other man-made objects. 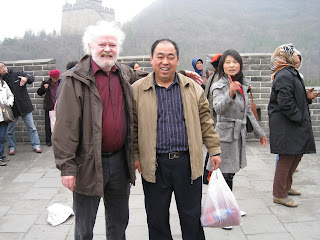 Here I am pictured with out driver. As Margaret and myself were the only two who enlisted for this particular tour, we had our own personal driver, who drove a Mercedes rather than a bus, and our own personal guide. As a matter of Chinese courtesy, the driver insisted on carrying my plastic bag when I met him on top of the hill I am ascending in the first picture. I wondered about his interest in climbing the Great Wall. Surely he had done so many times? Later I realized that he was shepherding us, worried we might go further than the first turret, thus delaying his arrival home to Beijing. I did actually go just a little further, to a shop where I bought a small bronze plaque with my name inscribed on it, certifying that 'I have climbed the Great Wall'. I am childishly proud of this plaque, even though I had climbed only a tiny section the Quang Queng, which is not really one wall at all, but several walls built at various stages of history. Much of the Great Wall was built by captured 'barbarians', who were forced to work till they dropped dead and whose bodies were 'built into' the fortifications. 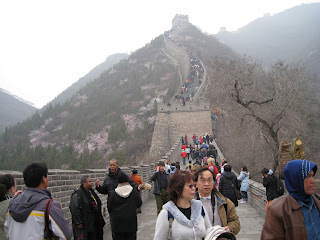 The shop where I bought the plaque is about an hundred meters beyond the topmost tower in this picture. Margaret got to the tower, too, and then experienced vertigo looking down. There were several people positioned along the wall offering to help the 'pilgrims' up and down the steps. They did it, of course, in expectation of a few yuan. In fact, each single step was almost high enough in itself to cause vertigo. Unfortunately, there was no bar at the top of the hill serving pints as a reward for our efforts.
Despite the fact that this particular patch of the Wall is very touristy, it was compelling and historically evocative to visit  it, especially to see the Great Wall stretch away into the distance on either side of the 'tourist trap' we were brought to, up and down the conical, turret-crowned hills. It reminded me also of a Chinese poem I had read once, expressing the homesickness of a Great Wall sentry.
Posted by Ciaran O'Driscoll at 17:41