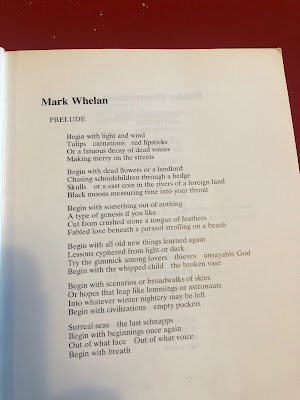 Mark Whelan died in Limerick University Hospital yesterday. The most recent poem of his I have read was in The Hong Kong Review, Volume II, No 2, edited by another Limerick man, John Liddy. Presciently, it was called 'My Death', and in it Mark writes:
There is a song to be sung
to break the windows of light
and to have nothing more
to do with time
I published the poem above, called 'Prelude', when I was guest-editor of Cyphers No 37. It is a poem which shows some influence of Beckett, to whose work Mark was devoted, but it also shows his very striking originality as a poet, and this originality is also revealed in the lines quoted from 'My Death'. A poem which Mark frequently recited to Limerick audiences, whether off the cuff in taverns such as Tom Collins' of Cecil Street and Flannery's of Catherine Street, or in more formal readings, is called 'A Shine Easy' and it ends:
A shine easy light
making the day reincanate
like a star
fallen into water
There's a lot more to be written about Mark, but let this suffice for the moment from a fellow practitioner and admirer of his unique poetic talent, following on the shock of his untimely death. Ar dheis Dé go raibh a hanam. (This latter wish is fairly certain to be fulfilled, I'd say.) 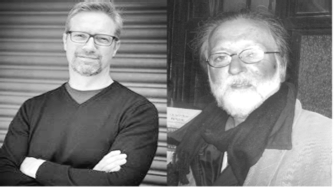