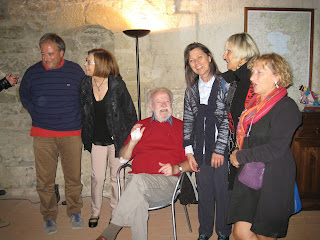 The tenth celebration of the poetry festival Riflessi DiVersi (hence RIFLESSI DIVERSIX on the programme booklet) took place in Perugia and Magione from 20th to 27th September. This photo is from the final night, Friday last, at the Torre dei Lambardi in Magione. All the readings are over, the festival has been hugely enjoyable and good-humoured, there remains a beautiful meal to be savoured at Luciano's in Passegnano, and for Margaret and myself, a 'free day' on Saturday and then it's up on Sunday morning at 5am to drive to Pisa for our flight back home.
Somewhat irreverently, the joke that I'm making here concerns my 'half-stigmata' (right hand only), which means I'm really only half a saint, and therefore not fit to give the assembled pilgrims my blessing.
Present L to R: Aurelio Stoppini, Vera Lúcia di Oliveira [talking to unseen Marco Viscomi], Self, Margherita Bernardini, Rita Castigli and Andreina Panico.
Posted by Ciaran O'Driscoll at 11:17