WHAT HAPPENED TO THE LOGGIA IN NOVIGRAD

I wrote a post a few years back called 'Did Magritte Holiday in Novigrad?' in which I admired an ancient loggia in that Istrian town. Looking out at the sea through the arches of the little loggia reminded me of the surreal effect of a Magritte painting.
The great thing about the loggia at that time was its public access; now, sadly, it has been privatized, bought, and closed to the public as the Croatian word privatno announces on the notice hanging on the cordon in the picture below. 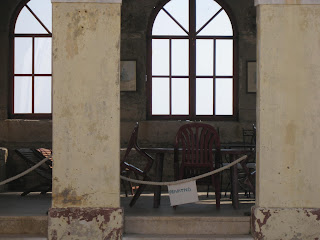 Here are two of the original pictures taken by Margaret on our first visit to Novigrad in 2011: 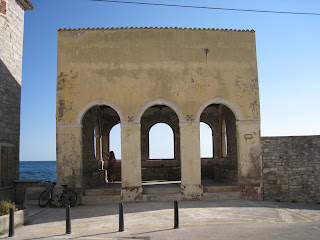 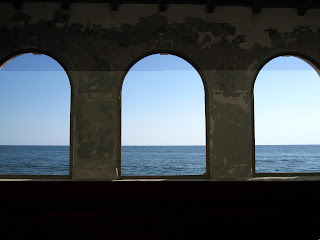 In the first of these, a bicycle leans against the end of the loggia, and a woman (presumably the owner of the bicycle) takes a photo from inside, through a glassless arched opening looking out over the sea to the left. That casual freedom to lean a bicycle against a public monument, to inspect and explore a public amenity, are now abolished by the word privatno.
The second picture attempts to capture the 'Magritte effect' which first attracted me to the loggia back in 2011.
And here, finally, is the loggia in full, as it looks today, after privatization, with tasteless up-to-date windows and its eccentric use as somebody's breakfast room. A hybrid, neither here nor there. 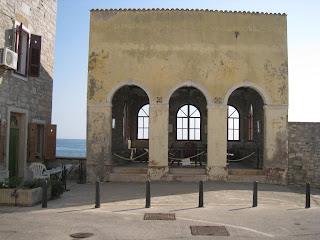