My blog has been active since 17 September 2010 and now that I have just passed the mark of 50,000 page views, it is perhaps time to take stock.
The blog began, as one would expect, with a modest count, not exceeding 1,000 page views a month until October 2011. In January 2012 it exceeded 2,000 page views a month, apart from a sudden drop to 734 in May 2012, followed by a sudden rise in August to over 3,000. The highest number of page views so far was reached March of this year, with 3,314. This month's quota is well on the way, with three days left, to be over 3,000. All very forseeable and low-key, I'm sure, but nonetheless a cause of a small celebration (*pours himself a glass of Pinot Grigio*).
To the anonymous cyper-pilots who touch down on my blog from time to time I say, Hello, how are you? Hope you got something out of your visits.

WHAT HAVE I BEEN BLOGGING?
My travels to various countries, whether on family holidays or because I was reading my work at foreign festivals and launchings; some poems and excerpts from my own writings and some works by others which I admire; publicity for poetry festivals, particularly Cuisle Limerick City International Poetry Festival and sister festivals in Slovenia, Italy and Brighton; a few reviews and some publicity for my novel, A Year's Midnight (published April 2012); photographs from our garden and some ancestral stuff; occasional reflections.

WHO VIEWS BLOG.CIARANO'DRISCOLL.IE?
According to the statistics, visitors from the USA are the leaders by a long shot:
United States 21758
Ireland 3606


Followed by Poland, Russia, Ukraine and Indonesia, with figures in the upper hundreds.

WHAT ARE THE MOST VIEWED ITEMS ON MY BLOG?
The top three are as follows:
(1) 'On the Edge of the Sahara 2', a picture taken of the ruins of Fort Bou-Jerif, on the rim of the Sahara in Morocco, with 4,233 page views. 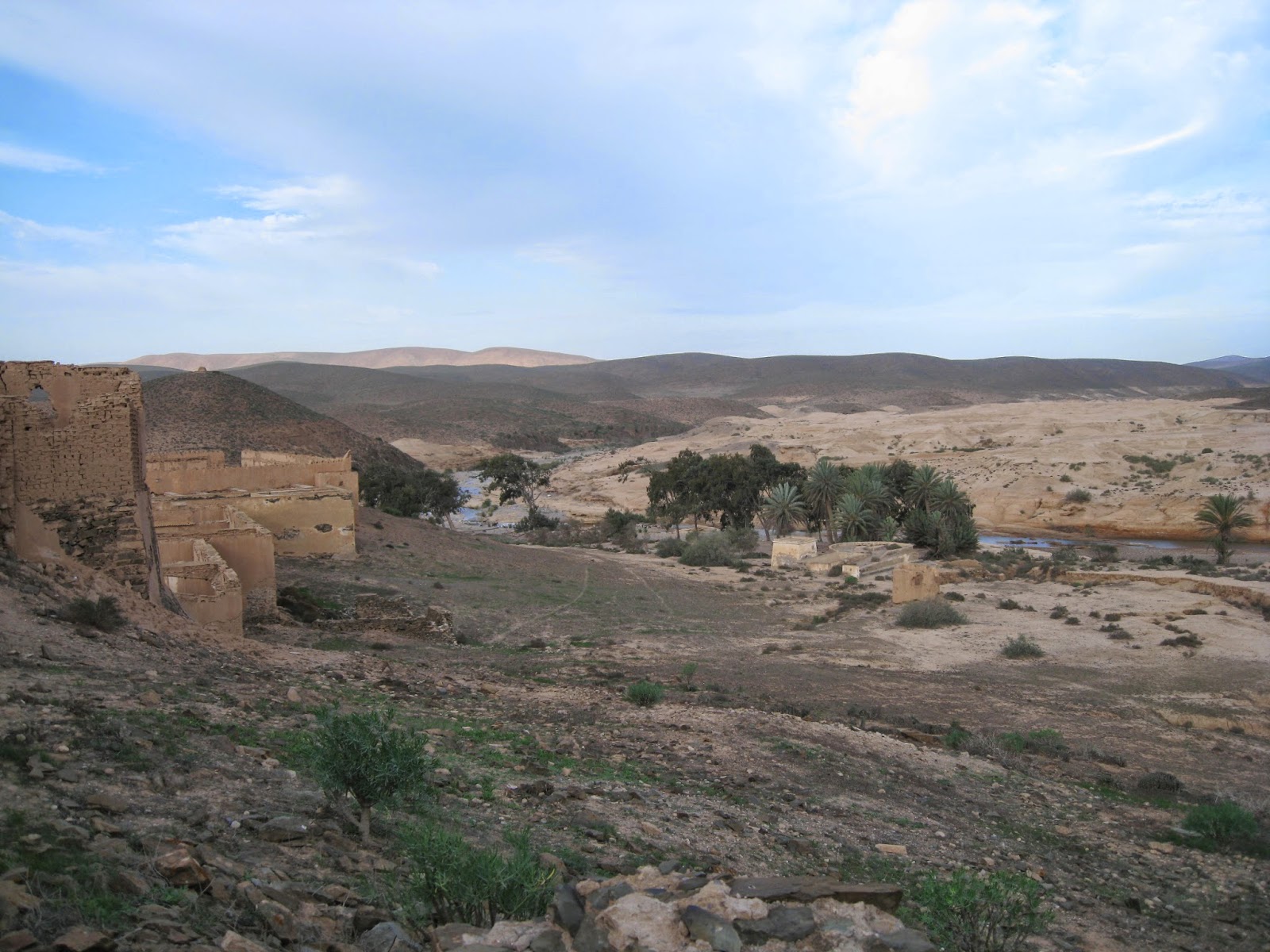 Scene at Fort Bou-Jerif, ruins of a French Foreign Legion stronghold (left) where nasty things were done to Berbers and lots of wine was drunk by the officers.
(2) 'Testing the Water', a picture of two figures, a man in bathing suit and a woman, standing on rocks conferring about the safety of the currents of the Reka river at the entrance to the Skocjan Caves in the Karst Region of Slovenia, with 3,556 page views.
(It's interesting that the two most viewed items have very little commentary attached, merely a caption. )
(3) 'The Great Wall of China', a commentary with photographs, on a visit by me and my wife to a section of the Wall, with 1,615 views.
Information blogs about poetry festivals are also high up on the list.
Of my own work which I published on the blog, the most viewed item is the poem 'A Message from Olympia', in the post 'Olympia Leaves a Note for Me'. This is number 6 in the current top ten, with 1,027 page views. The next highest item from my own writing is 'A Desecration of Considerable Magnitude', an excerpt from A Year's Midnight, with a view count of 779.
It puzzles me that the 'Desecration' episode of my novel shows a disparity between the 'page views' as recorded in the statistics, and the 'view counts' as recorded in the list of posts. The 779 'hits' recorded for the Desecration episode is a view count, and if a page view is the same as a view count, the post should be in the top ten page views in the all-time statistics, but it is not there, and numbers 8, 9 and 10 of the top ten all-time statistics have less than 779 page views. So: either a view count is not the same as a page view or else there's something wrong with Blogger's calculations! Some other anomalies I have encountered lead me to suspect the latter.