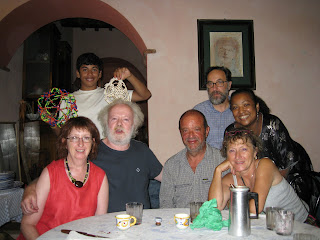 Here we are, Margaret and myself, in the summer of 2008 among Italian friends. The setting is a converted farmhouse in the countryside near Perugia. On Friday (29 April) we are returning for a few days to the farmhouse, where we spent a most amazing and creative year in 1994 – 1995. We are looking forward to meeting these friends again after almost three years, which is the longest period we have stayed away from the place since our year's sojourn there.
The area has become the setting for a gothic novel, 'A Year's Midnight', which I hope to publish shortly. I have already published a number of excerpts from it on this blog, e.g. 'A Desecration of Considerable Magnitude' and 'The Canine Position on Abortion'.
The idea of the novel was a sort of 'what if?' proposition. What if the year we spent in Italy had been a complete disaster, instead of a complete success? Imagine two characters like yourselves, who arrive in the heart of rural Italy with a five-year-old child, knowing practically nobody, with only a rudimentary knowledge of the language, hoping to make it a period of renewal, and everything gradually goes haywire for them.
It is largely thanks to the people in this photo, and a number of others, that we can look back on that year in Umbria with such affection and vivid memories.
Posted by Ciaran O'Driscoll at 16:48