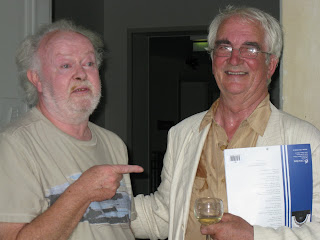 The person I am pointing at in the above photograph is Derry O'Sullivan, an Irish poet who has lived the best part of his life in Paris, and writes in Irish, translating much of his work into French and English. The occasion is the launching last year of his fourth collection, An bhfuil cead agam dul amach, má's é do thoil é? at the Centre Culturel Irlandais. The title means 'May I go out, please?' (literally Do I have permission to to go out, if it is your will?) Three of O'Sullivan's collections have titles which are questions, the previous two questions being 'Where is your Judas?' meaning judas-eye but with a hint of betrayal, and 'Where is the landlord of l'Univers?' – l'Univers being a pub in Paris which Derry frequented, but with a hint of God. His other collection is a long poem which was sparked by the discovery that his apartment in Paris housed a Jewish family during the Second World War, and that the family were taken away by the Nazis; it is called An lá go dtáinig siad  – 'The day they came'.
'An bhfuil cead agam dul amach má's é do thoil é?' is quite a lengthy title for a book, and indeed it was quite a mouthful for a primary school child in the 1950s to have to say if he or she wanted to – or pretended to want to – leave the classroom and go to the toilet. In my primary school in Ballyline, County Kilkenny, it became truncated to 'Mac-mac a dul é?' which of course is complete gibberish, reminiscent of the gibberish anglicisation of many Irish place-names, e.g. Knockcrockery, which to me conjures up an image of mayhem in a china shop. And what may we say about Termonfeckin?
Posted by Ciaran O'Driscoll at 17:44