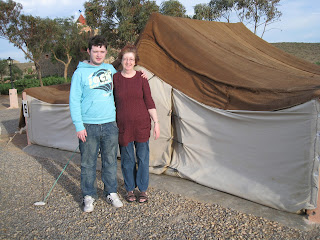 Our son Conor and my wife Margaret outside our faux Berber tent. 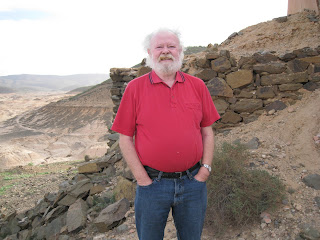 I remember a book set in Morocco which I read in boarding school: 'The Strange Land' by Hammond Innes. Having finally visited Morocco fifty years later (setting my foot on the African continent for the first time), I can vouch for the accuracy of that title, at least as far as my own first impressions were concerned. Maybe my perceptions were heightened because I was recovering from a fever and gastric flu. In the above photograph, taken at the ruins of Fort Bou-Jerif, I seem to be on the mend, though I still felt shaky at the time. The best night's sleep I have had for ages was in that Berber tent. It was strangely comforting to be in a strange land, in the middle of a wilderness, in a tent that flapped from top to bottom in the morning wind as I woke.
Posted by Ciaran O'Driscoll at 13:59