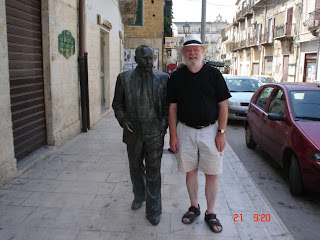 Here I am with Leonardo Sciascia in his home town of Racalmuto, near Agrigento, Sicily. Not very well known in English, Sciascia wrote novels exposing the Mafia and their infiltration of politics and police in Sicily and Italy. His most famous novel is 'Il Giorno della Civetta' (The Day of the Owl). He also wrote political commentary, plays and poetry.

And here is a rather cubist view of Caltanisetta, taken from Enna, the Sicilian capital. 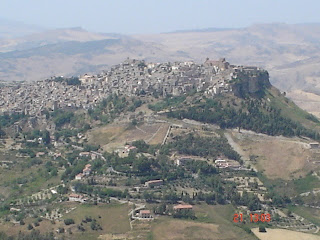 Enna is located high on a mountaintop almost in the exact center of Sicily, affording a panoramic view overlooking the scenic valleys of Sicily's rugged interior.
Caltanisetta is a city located on the western interior of Sicily, capital of the province of Caltanissetta. It lies in an area of rolling hills with small villages and towns, crossed by the river Salso.