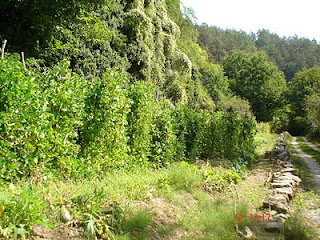 It could be in Ireland, what with the grass in the middle of the lane and the drystone wall, except for the fruit and vegetables growing on the left. This patch is not beside any house, but is obviously tended, a kind of rural allotment.
The lane is a short walk from one of the largest caves in the world. The month is September, the weather balmy.
I was there to attend the 2008 Golden Boat Translation Workshop, run by Iztok Osojnik and Ana Jelnikar.
'The Golden Boat' is the title of a book of poems by Srecko Kosovel, a brilliant Slovenian modernist poet who died at the age of twenty-two, early in the last century. He died from pneumonia, having walked home from the opera in Trieste during a storm. Kosovel's Golden Boat refers back to the Golden Boat of Rabindranath Tagore.
Posted by Ciaran O'Driscoll at 16:28