IT'LL BE QUIETER WHERE WE'RE GOING


Here is the beginning of my novel, A Year's Midnight, as main characters
George and Barbara arrive in Italy for a year of self-development, away from it all.

George stood in the bar of the Autostrada Servizio, irritably puzzled
as to why he was not being served. He was being ignored yet again.
This was the story of his life. Furthermore, he didn’t understand what
was going on. Was there, or was there not, a queue?
Barbara understood that there was a queue, but that it wasn’t an
orderly queue. Or that there was an order, but it didn’t take the form of
a queue. She didn’t subscribe to George’s theory of cosmic conspiracy.
It had been a tiring day. They had named it the Day of the Hun-
dred Tunnels, driving from Provence through Ventimiglia on the Italian
border, past Genoa, and they had just veered inland towards Florence.
There was farther to go, a couple of hours more to the town, and then
they had to find the remote farmhouse. But they felt they should stop for
a while, chiefly because of Alan, who was hungry and whingey in the
back seat. Besides, it was hot – for them, that is: a beautiful afternoon in
early September, a mere thirty-three degrees.
The bar was crowded. The queue that was not a queue had several
tails. A large woman up at the front was arguing with an impassive bar
attendant. Brandishing a lottery ticket, she turned frequently to shout at
other customers in the same accusatory tone with which she addressed
the mask of a face on the other side of the counter, arguing her point to
everyone present, to the nation and to the world.
Purple-faced, George turned to Barbara, raising his eyes, mouth-
ing an obscenity.
‘Welcome to Italy, George,’ she said.
‘Welcome to bloody chaos, you mean.’
‘Don’t worry, it’ll be quieter where we’re going. Much quieter.’

Available from Amazon.co.uk and Amazon.com, in print and on Kindle. 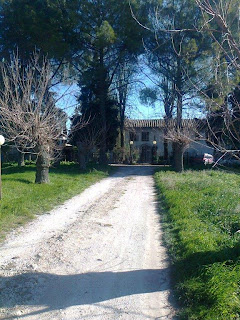