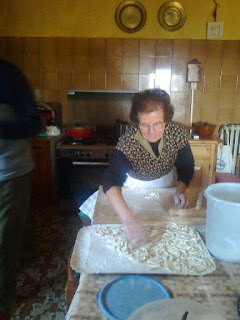 The mother of an Umbrian friend makes a pasta called umbricelli, a slightly thicker kind of spaghetti. Here she is separating the strings from one another in case they stick. The blur on her right hand is probably caused by the rapidity of her movements. I was told that the derivation of umbricelli is not from Umbria but from a dialect name for a worm, umbro, which derives from a worm's brownish colour (umber), hence the name is cognate with vermicelli, from verme, the standard Italian name for a worm. But it may be that Umbrians prefer umbricelli to vermicelli or spaghetti because of the sound association with the name of their province.