The Agustinian nuns at Chiesa dei Santi Quattro washing and cleaning out their Peugeot hatchback in the forecourt. In their good habits, not their work ones!

Went to Piazza del Populo in the little electric bus 117. It tore through sidestreets. I walked back along Via del Corso, turned left and found myself at the Spanish Steps. Went into the Keats Museum just to allay a niggling doubt that I may have left my wallet there. I hadn’t. Lots of designer shops in this area, Margaret would have had a ball. Among them familiar ones from everywhere (global capitalism): Bally, Zara, Yamaha, Mango, Dolce & Gabbana. The survivors of ‘one capitalist kills many’ (Marx).

It was damp but mild. A light rain falling intermittently. Dull but lively. I had a tuna and tomato panino and a glass of Chianti outside a cafe named after its street, ‘Cafe Frattina’. 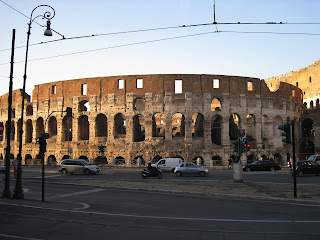 I’m getting to like the constant sound of the screaming, scavenging seagulls around Villa Irlanda. Sometimes it’s a witch’s cackle, sometimes a hearty but cynical laugh, sometimes a dog barking (or is that an actual dog barking?). I am beginning to rein in towards home and looking forward to it, which is a good sign that I have more or less achieved what I set out to do. May the Lord spare me any serious hiccups during my last few days!

When I was in Despar today, at the bread counter, an Asian man came in a bought a single bap. It was weighed, put in a paper bag and sealed with a price tag. Cost 15 cent, I think.

Yesterday afternoon, on my way to the presidential reception in the Irish Embassy, I got off the 75 bus at the junction of Via Fratelli Bonnet and Via G. Carini and went into a bar gastronomia on the corner for a glass of wine and an egg and turkey sandwich. Two young women (around 20 y.o.a) came in, one pimply with lank fair hair, wearing a black hoody with BASS HEAD in white on the back, carrying a shoulder bag and two hula hoops, the other one shorter, in red and black. The first had an Irish accent, spoke English and was clearly also learning Italian words from the other. The Irish lass with the candy-coloured hula hoops ordered a grappa and a Jameson, the other had a grappa. ‘We should get some wine,’ the Irish one said. ‘We can get it in Despar,’ said the other. ‘We should get it in a wine shop,’ said Hula Hoops. Sweet and twenty and determined to get pissed. Going to a party at the nearby American Academy??

On my way home from the embassy, I got a very sweet smile from a girl in a takeaway pizza place in Largo Argentina, and we shared a wordless joke: the way she picked up on her fork the tiniest piece of smoked salmon that had fallen off my pizza slice and put it back on.