Reka is the Slovene word for river. There is a river in Slovenia which is simply called Reka. Hence when we call it the Reka River in English, we are calling it the River River. An interesting idea: is there a River River, the essence of all rivers, the Platonic Idea of Riverdom?
The Reka rises in Croatia, flows through western Slovenia and enters the Skocjan Caves, where it disappears beneath the caves to re-emerge eventually as one of the springs that feed the Timavo River in Italy, hence makes its way to the sea as part of the Timavo. Many lives were lost in the nineteenth century by volunteers with inadequate equipment and experience who tried to find the path taken by the Reka when it went underneath the Skocjan Caves.
A strange river, but looking at this photograph (taken very close to where it enters the cave) you wouldn't think so! 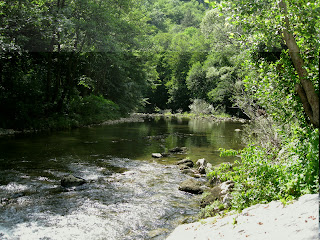 river don’t cast me aside
in a mood-swing of your psyche
we are passing the time of day
together, let me stay
crouched here listening
to your pure palaver
Posted by Ciaran O'Driscoll at 15:26