EVIL HAPPENS WHEN DOGS ARE NOT WALKED 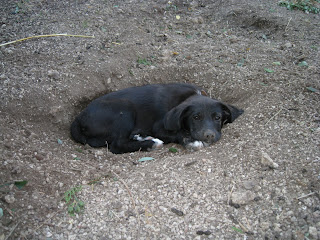 George, a writer who has suffered a nervous breakdown, and his partner Barbara, an art teacher, along with Barbara’s child Alan, embark on a year’s sojourn in a farmhouse in rural Italy. Intended as a period of recuperation for George and a break from the rigours of his writing, and for Barbara as a sabbatical to develop her painterly talents, the year deteriorates into a nightmare of recrimination and bitterness during which George, aided by mysterious apparitions and voices, begins to recall an unsavoury period of his childhood.
Barbara, worried about her thyroid problem and heartily sick of her partner’s drinking and shiftlessness, goes home to London for Christmas after a final quarrel when George returns to the farmhouse late and sees her in the arms of their landlord, Rogero.
George is befriended by Piero, a neurotic ex-professor of psychology, who is now venturing into the paranormal, and his ravishing daughter Tessa, and endures the company of the landlord’s three neglected dogs.....

From A Year's Midnight a novel © Ciaran O'Driscoll 2011

http://www.pighog.co.uk/titles/a-years-midnight.html
Posted by Ciaran O'Driscoll at 11:11