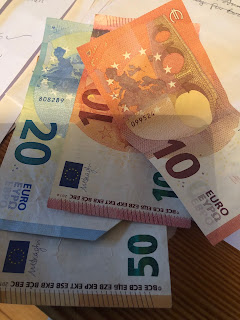 Feckit, where would we be without him?

B: Fumbling in a greasy till, I suppose.

A: Easier said than done, feckit.

B: What’s that feckin noise upstairs?

falling out of the cupboard again.

B: Feckit! Weren't we to get him a nice little plot

down in the churchyard for himself?

A: We were feckit! But we were too busy saving

for that holiday in Tsunamiland.

B: Poor old Mr Skeleton without a plot. Feckit!

A: And the state of his house, feckit!

B: And the state of the economy, feckit!

A. And the Feckitism of Commodities.

B: Oh God yes, the Feckitism of Commodities.

A: And now they say Beckham

has become a feckin commodity.

B: Feckit, you’re right. They say he’s a prime case

of the Feckitism of Commodities.

A: They never said a truer feckin word!

B: When did he become a commodity, do you think?

B: Oh feckit I don't know. He went awful quick in the end.

A: And he was such a nice feckin lad.

B: And to think he's a commodity now.

B: It would indeed. But feckit, sure he had

the figure for it.

A: Ah sure, feckit, he had. You could see it coming.

Posted by Ciaran O'Driscoll at 15:35 No comments: